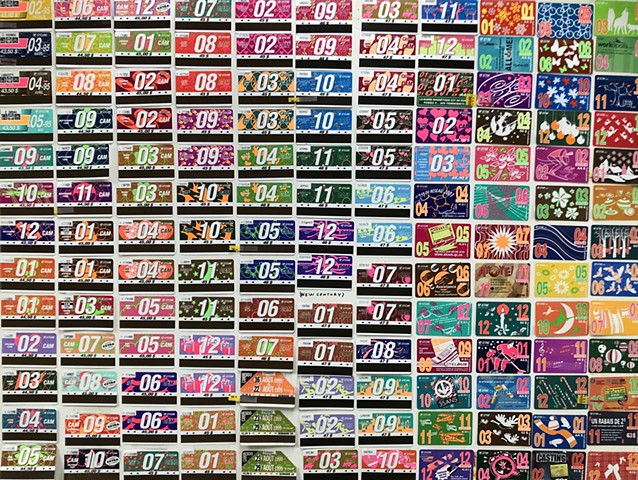 Montreal, mid-1990s. Having moved out from my marital home in a amicable yet wrenching separation, it became necessary to buy monthly bus passes. The employment center was too far to walk to, and I had to get to wrestling practice three times a week.

For whatever reason, I tucked the first pass into a plastic sleeve. Same with the next one. I had never heard of Agnes Martin or Rauschenberg at that point, nor was there an artistic goal in mind. The passes stacked up. At one point, I think I hung on to them in case there was a tax credit for strap-hangers like me.

Randomly, they built up. Months turned into years. I remarried. At one point, he and I both rode the busses, hence some months are doubled. Life events happened, as they do to us all.

In 2006, I was taking night courses at Concordia University while working full-time in the office world, and took a Studio Arts course, which begat this piece. By some 1 in a billion chance, the random number of saved bus passes filled the foam core board completely, even with a half-inch gap to mark the passing of century to century, which was actually the dawn of a new millennium. [Got an A+ in Studio Arts!]

The passes, representing thousands of dollars' worth of Montreal travel time, are scotch taped to the board so that each can be lifted. SOME have little tabs. Under those passes, you'll find cryptic typed messages such as, under October 1999 denoting my father's death.

"Various Lifts" along with a playful allusion to bus rides around town, also refers to the passes -- depending on which ones the viewer peeks at, they'll get a slice or 'social MRI' of my life. The viewer can lift whichever month and year speaks to his or her experience, from which they pick up their own "Various Lifts".

What moves me, and has from earliest memory, is the sheer poignancy wrought by the passage of time and our human journey through it. Ephemera such as represented by "Various Lifts", including the physical bus passes I clung to for dear life, as I'd not been able to afford to replace any one of them, the daily grind they symbolize – going to work, to wrestling practice, to the Montreal Museum of Fine Arts for sanity's sake, etc., all so intense and personal at the time, yet, wholly impersonal now.

PS: How much effort did I put into freestyle wrestling while working 40-hour weeks? Enough to get the 1998 Senior Women's Canadian Gold Medal. After that, back to working and painting during stolen moments. It was a safer pursuit.