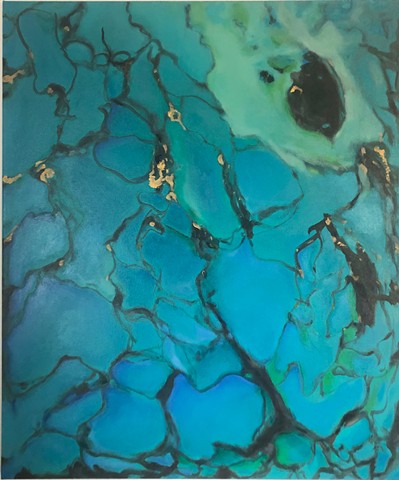 Originally begun 2-Nov-2008, intended to be a reproduction of an antique Navajo ring which my husband owned but never wore, because it was unusually large. He later returned it to the Begay family, as it seemed only right. (G. spent so much time at their house in Page, AZ as a youngster that the Mom adopted him into her Clan.)

Later, I returned to the empty blue canvas to try depicting a Navajo-made Bisbee turquoise ring bought for me by my husband at the Cameron Trading Post (Cameron, AZ). The stone later fell out somewhere in Salt Lake City during my very first Made in Utah show.

One can never own such precious stones; merely borrow them for a time.